Digital Magazine is Updated thru the start of the season!!  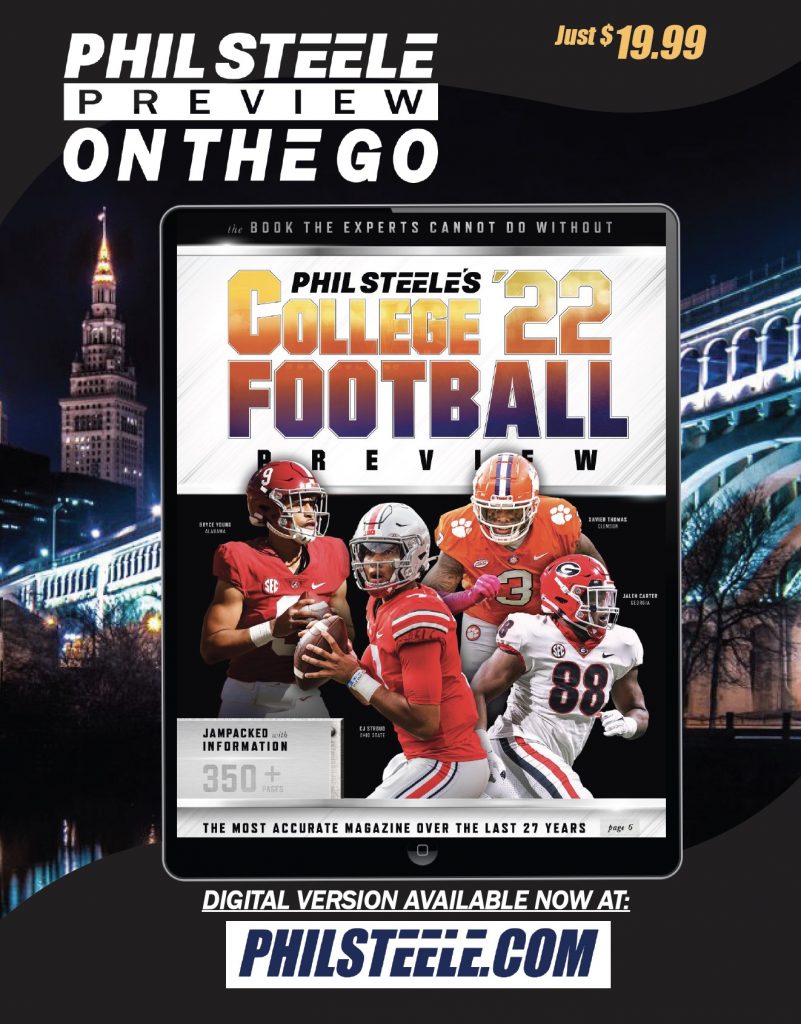 You already know that the Phil Steele 2022 College Football Preview has three to four times the information of any other college football preview. You already know that we give the same amount of coverage to teams like Akron or James Madison that we give to Alabama and Ohio State which is two full pages. You already know we spend seven months putting this magazine together each year. It is called the bible of college football for a reason and by the end of the year everyone’s magazine is dogged eared, torn up and marked up due to constant use.

A few years ago, I dipped my toe in the water of the digital magazine market. The results were underwhelming. The first company we used was decent and got the magazine up and readable, but it took a long time from the day it was printed until it was produced. We used them for a couple of years. They were decent. Another company came along with lots of promises, They improved the speed of getting it on the market the first year, but the digital version would go down from time to time. They had a lot of promises of how great they were and how they would have a first-class product. In the second year instead of being improved they had more problems. The third year they got even worse and then just basically took my money and went out business a month or two into the season and the digital version was a disaster. If you bought my digital version in those early years, I apologize for any problems you encountered.

I pride myself in producing a FIRST-CLASS magazine where you can trust the source on all 131 teams and trust the information that is on the pages. With basically 1,000,000 words and numbers in the magazine, even if we had just 1% typos or mistakes, there would be 10,000 typos. We have very few typos in the magazine so our accuracy in that department is closer to 99.9%. The magazine is the best on the market by far and I take great pride in spending all 365 days of the focusing on one sport, College Football. The experiences I had with the digital version were unacceptable. The problems with the digital version had me thinking of discontinuing that aspect of the magazine as it was less than first class.

In 2021 Learfield approached me with a partnership deal that included them producing the digital magazine. Now, Learfield is a FIRST-CLASS company that is very entwined in College Sports. Last year they took over the digital magazine and delivered on every promise they made about the magazine. One of the really neat features was that they could update the pages as changes happened. We did update the pages the pages last year all the way up to the start of the season. The digital version worked great, worked all year long and was updated thru the start of September.

This year there was a paper shortage, so we had to print the magazine in two runs. The first run went entirely to my good friends at Barnes and Noble. The second run was done in late June and is finally hitting stores like Books-A-Million, CVS, Food Lion, Kroger, HEB, Harris Teeter, Ingles, HyVee, Meijer’s, Publix, Food Lion, Safeway, Walgreens, and Walmart. All my focus has been on letting people know about where the magazine is available this summer so you can get your hard copy.

One great feature of the digital magazine is that is available about one day after we send the magazine to the press. This year we had major problems with a printer in Denver that we were forced to use due to the paper shortage. They took WEEKS to print the magazine. This year we offered a special VIP package thru the end of May. Part of that package was giving a free digital magazine with the VIP package. My VIP members were able to access the magazine via the digital version two weeks before it came off the press and about a month before it started to hit the bookstores. I will have a blog in late September letting you know how to get the VIP deal for next year.

Now this is the 28th edition of the magazine and you know I am old school when it comes to how I want to access the information. I want it in magazine form and in my hands. Due to the feedback I get, I would say the majority of my readers feel the same way! I will have an interesting blog on Wednesday that shows how the magazine is actually quicker than the internet in looking up information. I do realize that some of my younger readers ONLY use the digital version and rarely use printed materiel. I remember a couple of years ago that former Ohio State/Minnesota Viking RB Robert Smith who was a colleague of mine at ESPN told me he preferred the digital version. I would estimate there is a decent amount of the population that prefer digital.

The really interesting feature about the digital is that the Learfield digital version is updated DAILY thru the months of June, July and August. Let me give you a couple of examples that are updated right now in this year’s digital version.

Bill Clark did an amazing job at UAB but had to step down this summer due to back issues. This happened after the magazine went to the press. Here is the current coaches writeup on the digital version.

COACHES – Bill Clark did a remarkable job here, getting them back to eight wins and was my National Coach of The Year in 2017. He resigned in June due to health reasons so UAB promoted Bryant Vincent (OC SAla ’15-’16, UAB ’14) who has done a great job here the last 5 years as OC. He was also OC at South Alabama in ’15-’16 and was also OC here in ’14. The sixth year DC is David Reeves. The third year ST coordinator is Heath Thomas.

Boston College had just one returning starter on the offensive line, but he was a good one in Christian Mahogany who is my First Team ACC OL in this year’s magazine. Unfortunately, Christian is out for the year.

Here is the current Offensive Line writeup for Boston College.

Here is the current Projected Stating Lineup for Boston College

On Twitter on Saturday I posted that Northern Ilinois lost their WR/KR Trayvon Rudolph who I had first team MAC WR and 2nd team MAC KR.

Here is the current Receiver writeup for Northern Illinois

Here is the current Special Teams writeup for Northern Illinois

Here is the current Projected Starting Lineup for NIU.