The best ever magazine Deal – The VIP bundle

I would like to thank the good folks at LEARFIELD who are now partners with the magazine for allowing me to put out the best ever Phil Steele College Football preview magazine deal ever. There are many parts to deal and each one is a reason to get the VIP package but when you add it all up you get well over $100 worth of extra value for what you have paid for the magazine the last few years. Let me cover the details for you.

GET THE MAGAZINE FIRST – Well before it hits the newsstands!!!

You know the magazine has 3-4 times the information as any other college magazine. You also know it takes a long time to read thru the 350+ page encyclopedia. If you want to get a head start on reading thru the estimated 1,000,000 words and numbers that are in the magazine, then you need a head start. The magazine will be available on the newsstands on July 4th this year. I actually send the last page to the press on June 8th. It takes the printer about a week to turn the magazine around and last year the fine folks at LEARFIELD were at the press and started shipping the magazines AS THEY ROLLED off the press!! Included in the price of the VIP deal is Two Day Shipping! That means while the rest of country will be staking out their local Barnes and Noble and waiting until July 4th to be able to purchase one, you should have it in your hands by MID June! The VIP deal allows you to get the magazine well before it hits the newsstands!

GET YOUR CHOICE OF REGIONAL COVERS AND WE HAVE 14 of them this year!!!

I have put out regional magazines in the past but not very profitable for me and being a small operation, making sure the proper regional covers got to the proper states was always a struggle. Now that LEARFIELD has taken over the distribution and printing of the magazine those problems have been solved. Back in 2020 I changed it to just one national cover and once again last year it was just one national cover. The good folks at LEARFIELD have allowed the Regional Covers to return and this year there are 14 regional covers, the MOST EVER. You get to choose your cover. When you go to checkout for your VIP Deal just look where the Cover is and then scroll down to the cover of your choice. With 14 covers you should be able to find a team you really like on one of the covers!

Get FOUR Months of Phil Steele Plus, a $76 value ABSOUTELY FREE!!

Phil Steele Plus is the website of information that I created for my own use. During the football season I need to have all the latest numbers updated and at my fingertips every week. We starting putting the information up on Phil Steele.com back in 2009 so that I could have reference to everything I needed on one site for when I am breaking down games or doing radio or TV shows. We have added information each year and improved the site each year. Here is what is available on every team page.

Up to date stats and game grades for each team color coded in red and green with Green for Good numbers and red for Bad. You can actually scroll down all the way to 2009 and get each years stats in that fashion.

Individual player stats updated on a game by game basis (fantasy players love this) and once again these numbers are not only for the current year but since 2009. Want to see how a certain player does against a certain team? The information is at your fingertips.

Box Scores/Play by Play for EVERY game. College Press Box allows us to download the actual box scores for every game and we put them on the site right next to the game under the Box category. I go thru the play by play of EVERY game every week and you not only have access to this year’s box scores but all Box Scores since 2008. 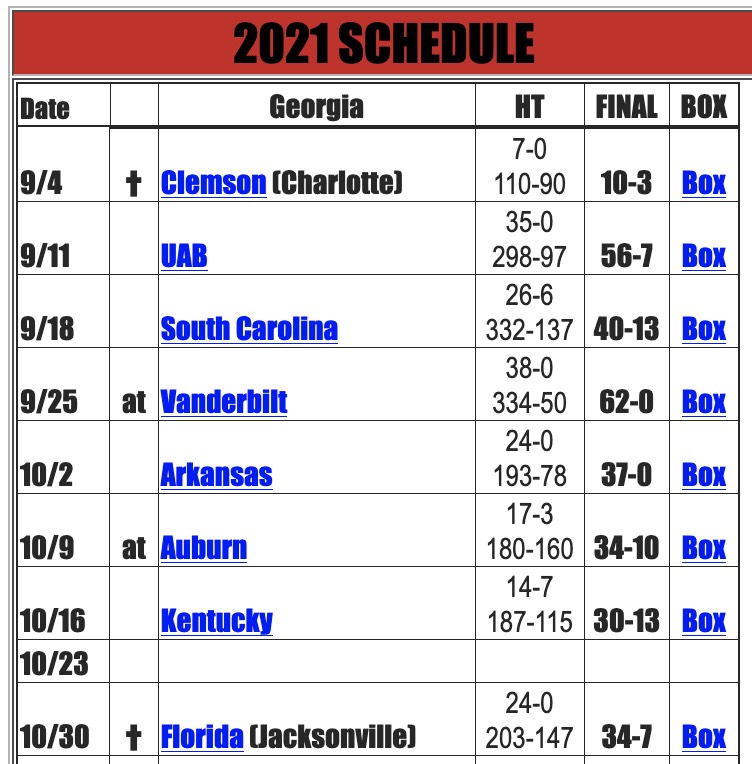 Start Charts – We update the Start Charts all season long for each team. Many of the school websites do not even list Start charts but we have them updated and you can go back and get Start Charts since 2009 for every team.

Team Info back to 1988 – Want to know who was the coach of the team?, what the record and stats were for each team and where they finished in the conference each year. It is in on one back with stats, records and coaches back to 1988.

Last 46 years Game by Game Spreads and Scores – I have been keeping track of the Vegas Point spread and scores on every game since 1976. We have the last 46 years Scores and Spreads for every team. Want to know the last time your favorite team was a 20+ point underdog. You can look it up in seconds. Every line that was posted on every game since 1976!

Team leaders the last 21 years – Which players led your favorite team in Passing, Rushing, Receiving and tackles since 2001 for all teams.

NFL Draft History – We have EVERY draft pick ever for every team! The first draft was 1936 and we have every player selected in every draft for every team including what round and overall pick they were.

Last 25 years Matchups for every game this year – Want to see what happened the last 25 years for any matchup this year. If it is a first meeting, we show you. If the teams played 5 times in that span each game is listed. If the teams met all 25 years we show you all 25. Green is for wins, the spreads and stats for each meeting are listed as well. How many times the home team won straight up and ATS, how many upsets, etc. It is all listed for every game.

I have invested close to 100,000 man hours thru the years making sure all this information is at my fingertips each week and continue to invest time each week to keep it updated. Phil Steele Plus is $99 for the year or $19 per month. You get FOUR MONTHS or a $76 value FREE with the VIP Bundle. You get the months of June, July, August and September absolutely free.

Double Deal saves you even more!

The magazine is a bargain at $19.95 and the two-day shipping is at or below cost at $8 for each magazine, which gets you to the $27.95 price. If you ordered two magazines separately, your cost would be $55.90. Since we can ship two magazines in the same package for the same price you save on shipping when you buy two at the same time. We also give you a discount on the 2nd magazine so your price for two magazines is $44.75 and that includes shipping, the digital version for Free and 4 months of Phil Steele Plus.

Note: If you want to order 2 Different covers for the Double Deal please call the office at 1-866-918-7711. The website store only allows you to choose 1 cover for both magazines.

How to get the VIP deal

The easiest way to get the VIP Deal is to click here and it will take you right to the philsteele.com store.

One note, the MAY 31st DEADLINE is REAL. We need to have all the orders processed so that we can ship them out as quickly as possible. You can still order the magazine after June 1, but you will not get the VIP special, just a great magazine.