This has been the most unusual year in college football history, but it seems to be stabilizing with football kicking off and many schedule changes. If you check out the archived blogs, you can print off an updated schedule for each team and paste them in the magazine. There are 76 teams playing football this fall. I have printed off and pasted up the SEC, Big 12, and ACC as those three conferences had some drastic schedule changes. The AAC, CUSA, and Sun Belt mostly kept their conference schedules the same, and so your book does not get too thick, I would recommend just writing the few changes on their pages. If you put all the conferences in your book, it would look something like this picture below. (Thanks, Katie!). 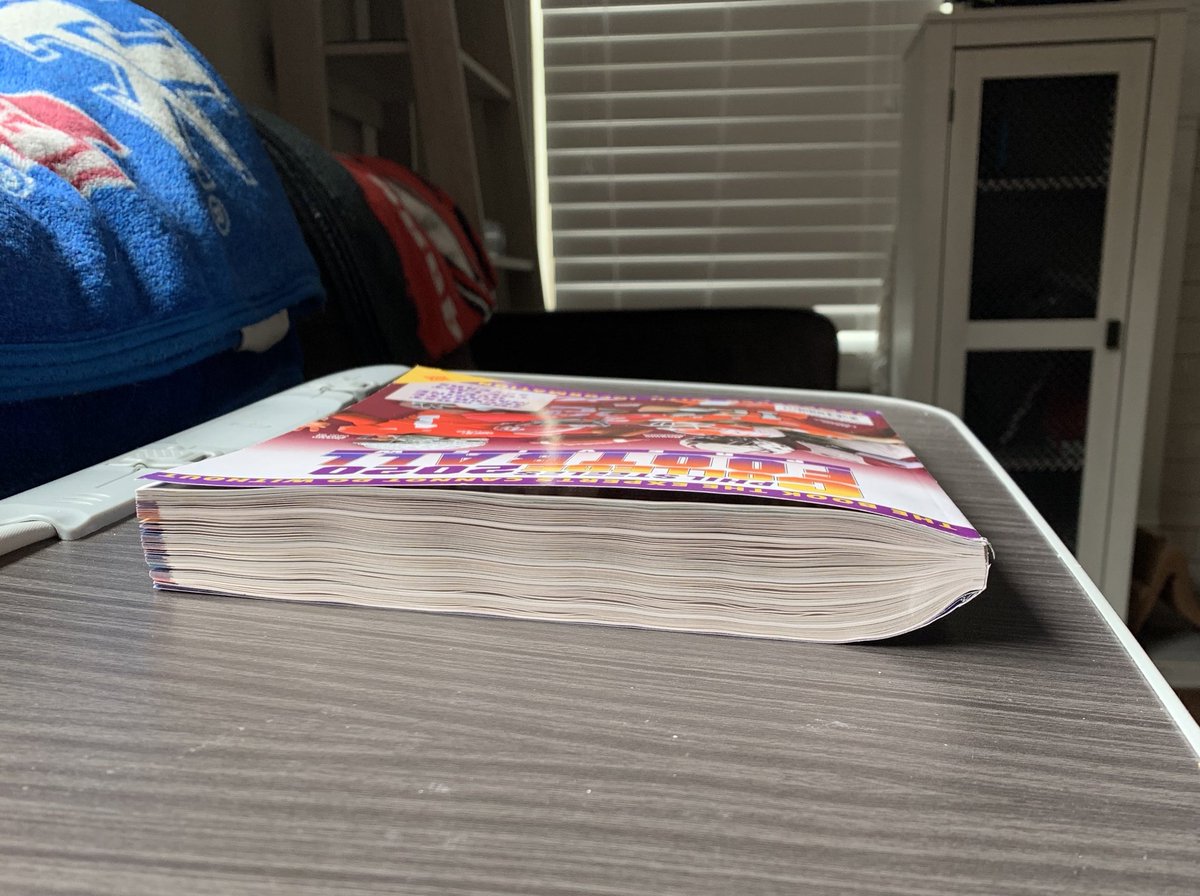 Going through the schedules, there are some drastic differences. BYU and FIU both play just eight games this year, and numerous teams play a full 12 game schedule. I have also cut the home edges in half from what I posted in the magazine for this schedule as I cannot imagine full crowds and full crowd noise at any game. There are still benefits from playing at home with the stadium’s familiarity and not having to travel, but crowd noise is a big part of the home edge.

The schedule maker did not do Arkansas any favors as the Razorbacks originally faced my No. 6 toughest schedule, but Nevada, ULM, and Charleston Southern dropped off the schedule, and Georgia and Florida were added, and they now lay claim to the dubious title of the nation’s toughest schedule. With the SEC being the nation’s toughest conference and playing ten league games with zero non-conference games, it is no surprise that the eleven toughest schedules are all from the SEC. Georgia Tech has Georgia drop off the schedule and is the only non-SEC team to face a top 12 schedule. LSU actually plays the “lightest” schedule in the SEC at No. 25 as they face Mississippi State, Vanderbilt, Missouri, South Carolina, Arkansas, and Ole Miss. Those teams are arguably the bottom six in the SEC this year, and LSU plays all of them in their ten games.

If this were last year, all of the ACC teams would be at the bottom of the Power 5 schedules as it was the weakest league. This year they are the most improved league, and with the addition of Notre Dame and the subtraction of the Big Ten from the season, the ACC is the 2nd toughest conference. Clemson plays the easiest ACC schedule at No. 42, thanks in part to not playing themselves.

The Big 12’s toughest schedule belongs to Kansas (#13), which is the only Big 12 team that does not get to play…Kansas. Oklahoma takes on the lightest schedule in the league at #43 as they do not have to face themselves and draw Missouri St in the non-conference.

Teams were not lining up to play a powerful UCF team, and the Knights have just nine scheduled games this year and face the No. 44 schedule. I rated the American conference as the fifth toughest conference last year, and Temple takes on the league’s toughest schedule (No. 35) this year as they are playing just eight conference games with no non-conference games.

Here is the updated Strength of Schedule rankings for the 76 teams that are playing this year.