When trying to determine the top conferences for a certain year, you absolutely have to consider each leagues record in the bowl games. In 2017 the Big Ten had a remarkable post season going 7-1 in bowl games with only Michigan losing and they led 19-3 late in the 3Q for their loss. The Pac 12 got beat up last year after the league went just 1-8 in bowl games. The bowl results had enough weight that the Big Ten finished #1 in toughest conference in 2017 and the Pac 12 was No. 5 of the five leagues. Naturally all the other factors are part of the ranking, but the post season proved to be the tipping point in 2018.

This year the bowl season will have an influence but there were no drastic differences in the leagues so this factor probably will not have as much influence. I do not rank the conferences in the post season just by bowl record alone. This past year the CUSA finished atop the actual conference standings going 4-2 in bowl games while the top Power 5 league, the Big Ten, went just 5-4. The overall win percentage is important but so are the teams that a league defeats. The four wins by the CUSA came against Northern Illinois (8-6), USF (7-6), Toledo (7-6) and Hawaii (8-6) and not a single one of those teams was ranked. Thanks in large part to Clemson the ACC did much better in the postseason in my mind. Clemson knocked off #1 Alabama and #4 Notre Dame. Syracuse also knocked off #15 West Virginia. The SEC finished the best in this category. Despite Alabama losing to Clemson, the SEC had THREE wins over Top 10 foes. Alabama beat #4 Oklahoma, LSU defeated #7 UCF and Florida defeated #8 Michigan. The SEC also picked up one win over a ranked foe in another game when Kentucky beat #13 Penn State. I award extra points for bowl wins over ranked foes and even more for bowl wins over a Top Ten foe.

Here are how the conferences ranked in the Post Season according to my method. 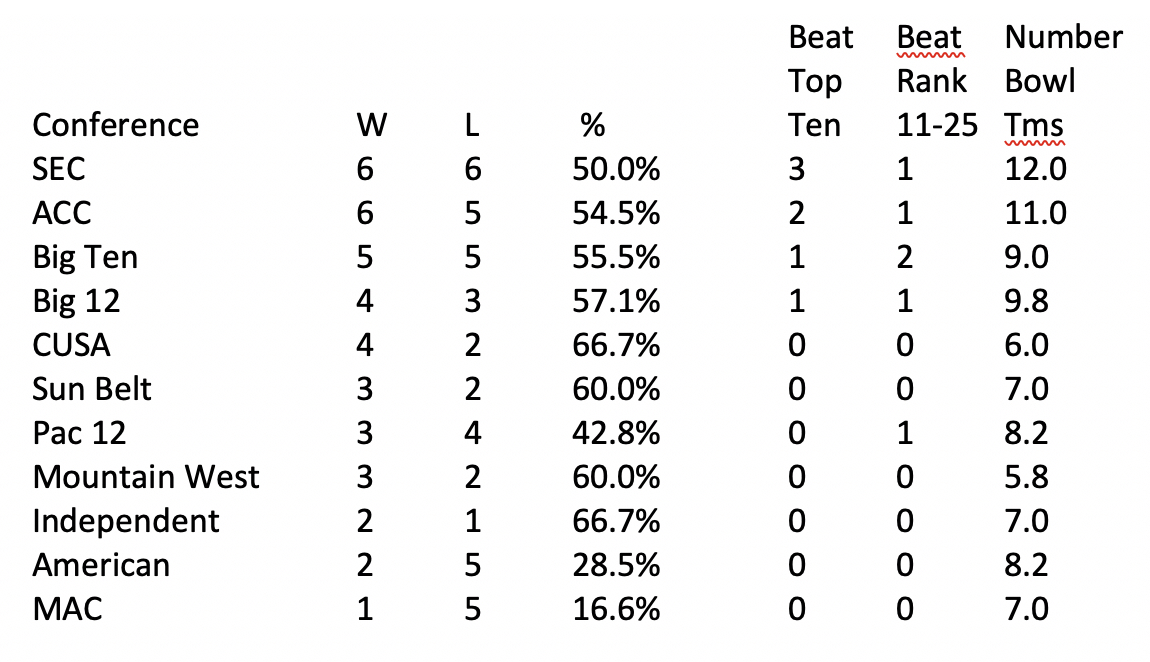 The MAC had a very poor postseason which mirrored their regular season results. The SEC again leads the category so even before the Fifth blog is revealed, I think you can guess which conference will be #1 this year.

Just for fun and it has nothing to do with this years’ conference rankings but I thought I would take a look at how each conference has fared the last two years combined.

Toughest Conf Part V will be available on Wednesday.