Ranking conferences is an inexact science, but I rank them every year and it is based on many different components. My first blog (Toughest Conf Part I) I took a look at the large amount of games played versus the FCS each year and how I do not count those in my records for non-conference games, unless a team lost to an FCS foe and that happened seven times last year. My second blog (Toughest Conf Part II) focused on how teams fared in non-conference games versus other FBS foes and then narrowed down even further to how each conference fared versus non-conference Power Five foes.

When trying to determine the top conferences for a certain year, I like to look at how many players got drafted from each league. The NFL does very thorough and extensive research into every player that is available for the upcoming draft. I will say that the majority of the time their research is spot on and players drafted have a much higher chance of making an NFL squad than does an Undrafted Free Agent. The NFL combine is a precursor for the NFL draft. The combine invited 338 players this year which is more than the total amount of players drafted. The actual draft will take about 76% of the players. When doing my toughest conference chart in February I have used the combine list the last five years to project the total amount of players drafted. I simply take the .76 and multiply it by the players invited to the combine for the conference. Before the magazine comes out, I go back and plug the actual number of players drafted from each conference into my excel spreadsheet and it is always very close to the numbers I have projected, sometimes matching exactly.

Here is a list of the invites by conference and then broken down to the number of invites per team. The Big 12 only has 10 teams so if they have a similar number of players drafted as does a 14-team league, they would have more drafted players per team and that must be taken into account with all things not being level among the conferences.

Here are my February projections for the 2019 NFL Draft 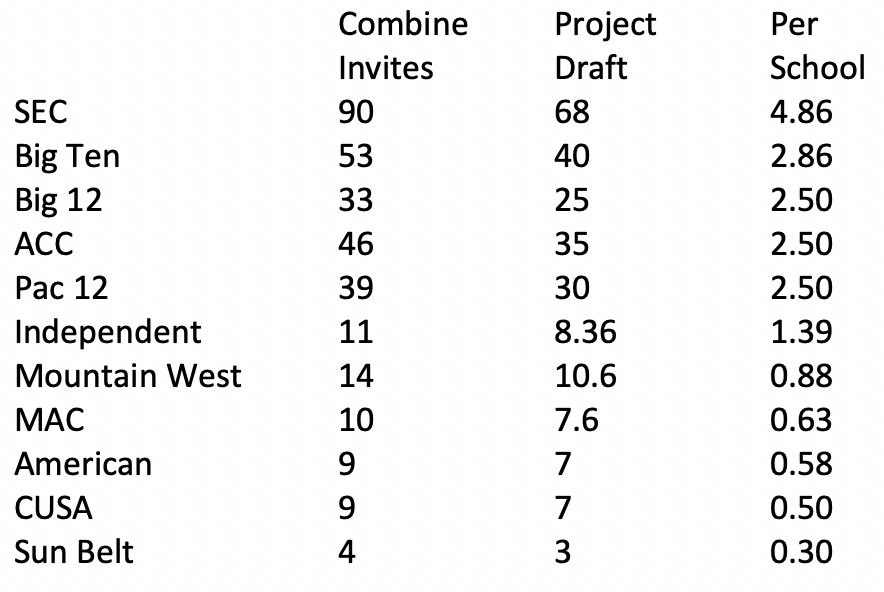 This is used for about 20% of the toughest conference grade. Not much separation between the Big 12, ACC and Pac 12 which all come up with 2.5 players per teams. The MAC finished at the bottom of the non-conference record chart but with 10 invites figures to have more players per team drafted than does the American, CUSA and Sun Belt. Only 9 invites from the American conference does surprise me and in their battle to become the top Group of Five conference they do lag behind the Mountain West in this category. Toughest Conf Part VI will be available on Monday.