Ranking conferences is an inexact science, but I rank them every year and it is based on many different components. My first blog (Toughest Conf Part 1) I took a look at the large amount of games played versus the FCS each year and how I do not count those in my records for non-conference games, unless a team lost to an FCS foe and that happened seven times last year.

I touched on the records in the first blog but here are the non-conference records for each league is you include those games versus FCS foes. 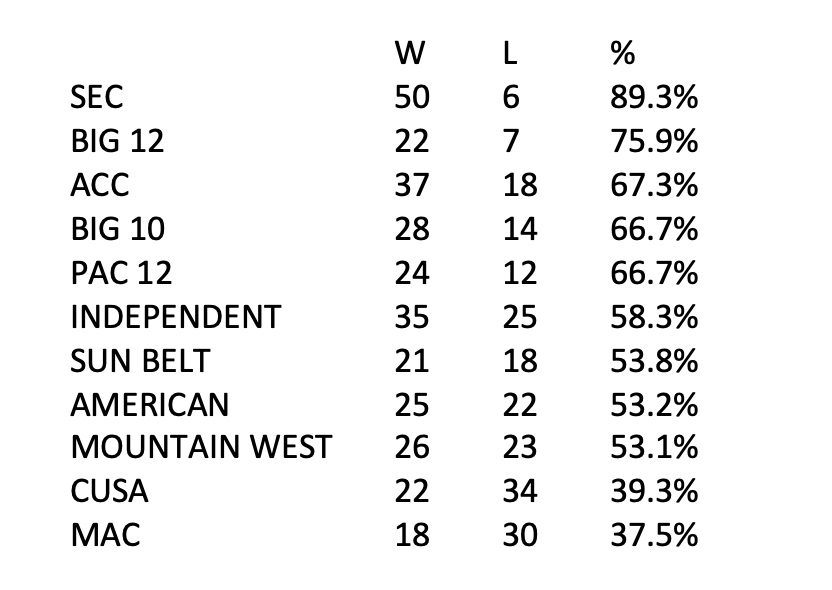 Now I will take a look at the non-conference games as I view them with no victory over an FCS foe counted but all losses versus FCS foes counted. Here are the final records for the just completed 2018 season 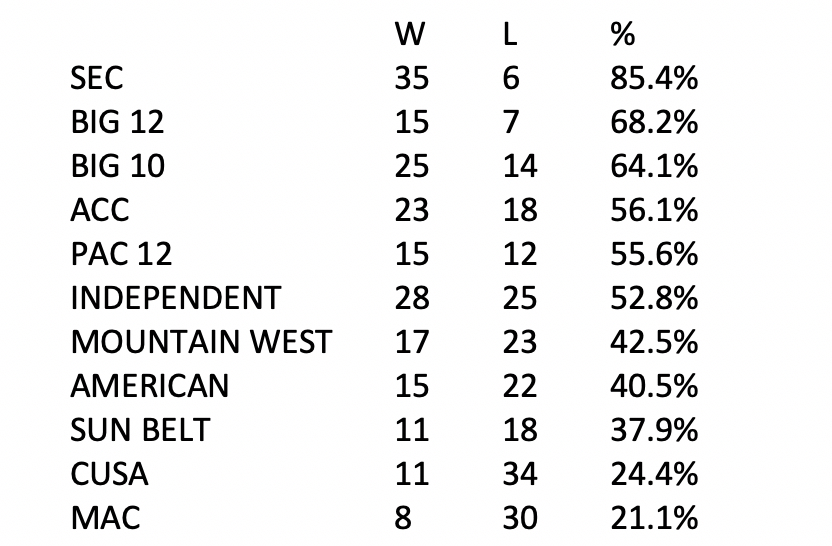 The biggest change in the standings is for the Mountain West which jumps from #9 overall up to #7. The Big Ten moves up from 4th to 3rd with the ACC moving down one spot. The Sun Belt goes from a 53.8 winning percentage down to 37.9% when you deduct the wins over FCS foes.

Now I will take a look how each conference fared when just facing teams from other Power Five conferences during the regular season in 2018. I have included games versus Notre Dame as being against a Power 5 conference foe.

13 of the SEC teams did face a P5 foe out of conference with the only exception being Arkansas. The Big Ten has 14 teams and played 14 games versus non-conference P5 opponents but Ohio State, Northwestern and Purdue played two each while Wisconsin, Minnesota and Illinois did not play any. Keep in mind the Big Ten, Big 12 and Pac 12 both play nine Power 5 league games while the other two Power Five conferences of the SEC and ACC only play 8 P5 conference opponents. The two conferences that faced the most P5 non-conference foes were the MAC with 24 and CUSA with 23. Since the ACC played five regular season games vs quasi ACC member Notre Dame, they led the P5 conferences with 18 games vs non-conference Power 5 teams. 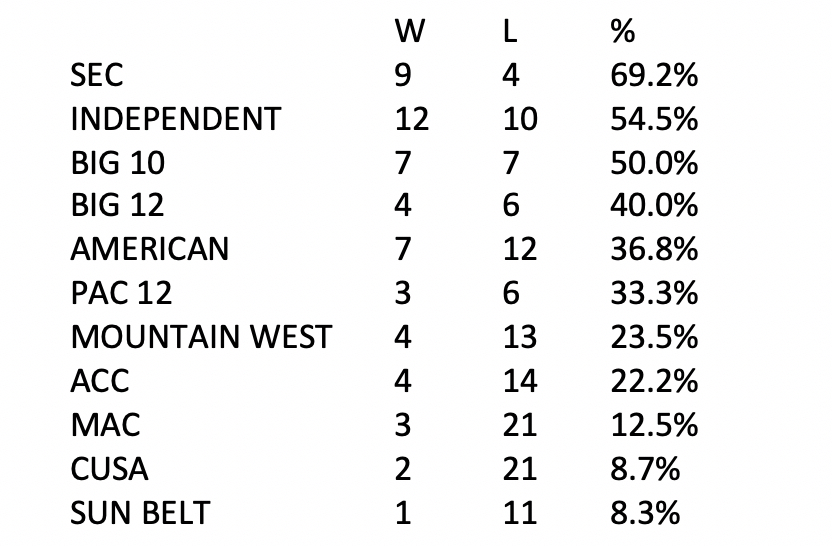 The SEC dominated this category with a 9-4 69.2% record.  The Big Ten was the only other actual conference to finish at .500 going 7-7. The Independents led by Notre Dames 10-0 regular season record versus Power Five teams actually was #2 at 12-10. It is very interesting to note that the American Conference finished #4 among actual conferences with a 7-12 record versus Power 5 schools and the Mountain West at 4-13 finished just a shade ahead of the ACCC for #6 among actual conferences. Clemson went 2-0 versus non-conference foes so the other 13 teams combined to go just 2-14 during the regular season.

I use regular season non-conference games as a part of my overall equation to figuring out who had the toughest schedule each season. Toughest Conf Part III will be available on Friday.