Each year in my magazine and usually in my summer blog series, I list the teams that lost the most or fewest games due to injuries or disciplinary reasons.  Although certain programs are better at keeping players healthy, while other programs tend to screen more rigorously for character (or perhaps are more lenient on punishment), the inclusion of a team on either list is generally attributable to good old fashioned luck.

For this reason, my research has shown that teams that benefit from great health tend to have a weaker season the next year. Perhaps the best example of the importance of health is the 2000 Oklahoma National Championship team, which did not lose a single starter all season.  On the flip side, injury riddled teams tend to bounce back and improve in the next year.  A past example is Colorado State, which lost 53 starts in 2012 to injury (and suspension) and went 4-8. In 2013, they were much healthier and went 8-6, including getting their first bowl win since 2001.

As I list each year, here are the teams that lost the most or fewest starts due to injuries and or disciplinary reasons. As I do every offseason I re-evaluate every article and tweaked some parameters. I adjusted the starts lost threshold to 34 or more (from 32 in ‘14) and 5 or less (from 6 in ‘14). I also found that NO team with 10 or more wins, when also having 34 or more starts lost, improved so therefore they were omitted. 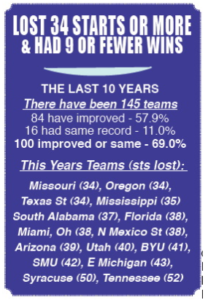 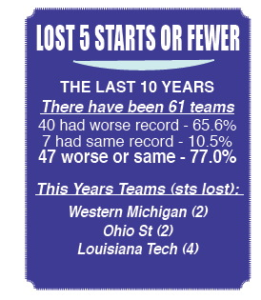 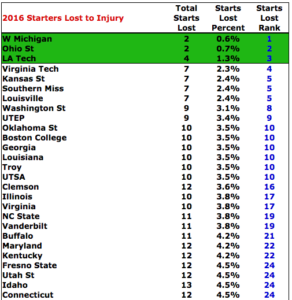 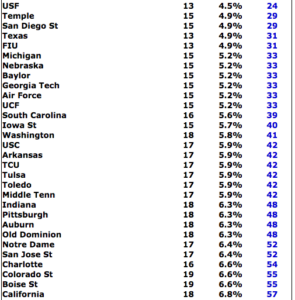 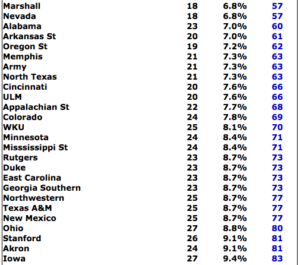 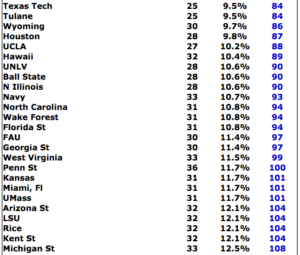 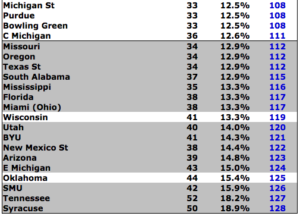