For the last week or so I have been going thru the individual factors in my experience chart from the 2017 magazine.

For a complete breakdown of each of the factors involved you can read those individual blogs.

I conclude the series by combining the five factors into my final ranking. I then devised a formula that factors all 5 into the total points equation and then turned the point total into a number from 100 to 0. A (100) would be a team with 25 seniors (NCAA scholarship limit) in the two deep and every yard and tackle returning and 120+ career starts on the offensive line. A (0) would be a team with no experience and 0 seniors in the two deep. Just as in years past the first number is where each team ranks in the NCAA.

At the top of the chart this year is Florida Atlantic as they have 17 returning starters and just 8 lettermen lost from last year and ranked high in every category. Miami, Oh #2 with 17 returning starters this year and just 11 lettermen lost. The most experience Power 5 Conference teams are Auburn which checks in at #6 overall and NC State at #7 overall. 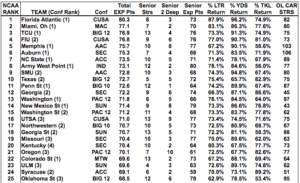 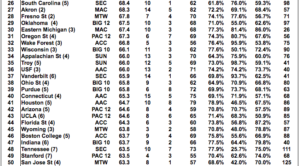 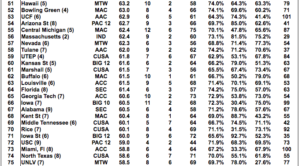 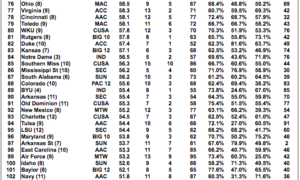