Today’s blog continues my in-depth look at my NCAA Experience Chart. For eight years I had listed an experience chart, which broke down the number of seniors, juniors, sophomores and freshmen each team had in the two deep and rated the teams experience level with a formula I devised. In 2009, I made the experience chart FIVE TIMES better by adding new categories like Career Starts on Offensive line, % of Offensive Yards returning, % of Defensive Yards returning and % of lettermen returning.

Today I will look at the % of tackles returning. I took all of the tackles made by the team a year ago and then took all of the returning tackles from 2016 and divided it into that number for the percentage.

This year the most veteran defenses are all teams I expect to improve their records this year. Syracuse leads the way with 89.2% of its tackles returning. #2 Florida St (87.2%) and #3 Georgia (86.6%). 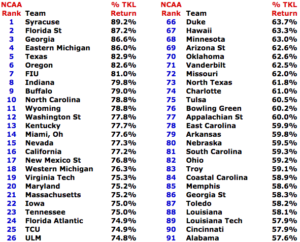 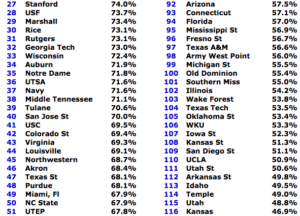