On March 1st, the Sun Belt released its 2017 football schedule.  Now that all the conference slates are out, the yearly debate can begin anew: Which team plays the toughest schedule?

There are many ways to assess schedule strength.  The most commonly used method is to combine opponents’ records from the previous season.  By this metric, the toughest 2017 schedule belongs to the UMass Minutemen, whose opponents won 65.2% of their games in 2016.  They are followed by LSU (62.8%) and East Carolina (62.4%).  According to this measure, the easiest schedule belongs to Miami, Ohio (34.0%).  Ohio (36.7%) and Hawaii (40.3%) follow the Redhawks along the path of least resistance.

I want to remind you that this is the NCAA’s method, not mine.  Prior to last year, this method said that Clemson was facing the 108th most challenging schedule as their opponents won only 45.3% of their 2015 games.  My method said otherwise.  I had Clemson’s schedule ranked 47 spots higher and 10 of the 12 Tigers’ opponents went on to play in bowl games.  It’s safe to say there weren’t 107 schedules tougher than Clemson’s.

There are other ways to approximate schedule strength.  Who plays the most teams that had winning records last year?  That honor belongs to the Duke Blue Devils, who will tussle with a whopping ELEVEN teams who won more games than they lost a year ago.  On the other side of that spectrum, Louisiana Tech, Miami (OH), and Ohio each face only two such teams in 2017.

How about who faces the most teams who made the postseason in 2016?  For purposes of this article, we’ll count the 80 FBS bowl participants, the 24 FCS playoff teams, and Grambling State and NC Central, who played in the Celebration Bowl.  Here, Duke is joined by Notre Dame, South Carolina, and Syracuse at facing 11 teams fresh off a postseason appearance.  Miami, Ohio is the ONLY team in the country who will face fewer than four such teams in 2017 (3).

Opponents who finished last year in the Top 25?  Arizona State wins this scheduling bragging right, boasting six teams that were ranked at the end of last year. Interestingly, they do not face any other teams that made it to a bowl. Florida State, Syracuse, UCLA, and Washington State are right behind the Sun Devils with five.

Combining methods can offer useful insight as well.  For example, Louisiana Tech played seven opponents who made the postseason.  However, only TWO of them finished the year with a winning record!

Here is the complete list of all 130 FBS teams including Coastal Carolina, which is eligible for the Sun Belt title this year, and UAB, which returns to CUSA after a two year hiatus from football. 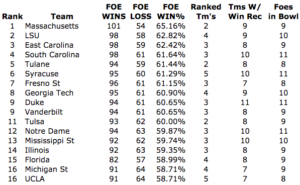 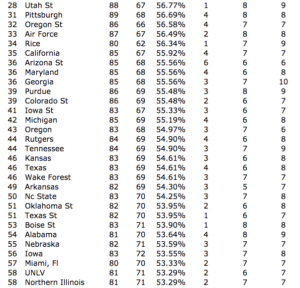 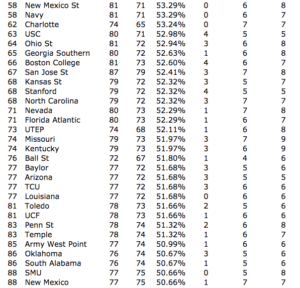 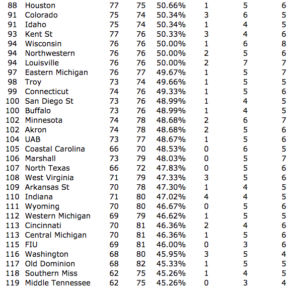